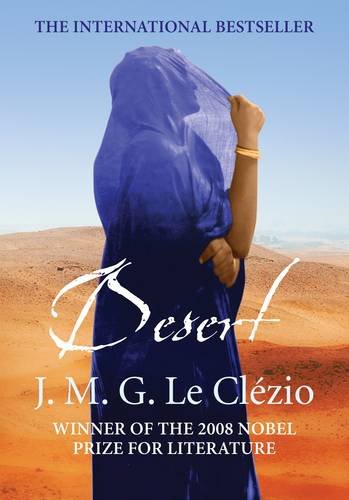 Well. I have just finished this giant of a novel and one word springs to mind. Light. So much of it. The scorching sunlight over the Sahara, the wonderment in Lalla’s eyes, the unyielding search for a safe land in the Blue Men, light is everywhere. It seeps through the lines and leaves a resonating feeling after the last page – that of the endurance of the human spirit and the constant search for beauty, hiding in the littlest things.

Desert – winner of the Nobel Prize for Literature 2008 – tells two interwoven stories. The first one is set in 1910-1912 and portrays the last insurrection of the desert tribes against the French protectorate ; we watch the conflict unravelling through the eyes of a young boy called Nour. Years later, we meet Lalla – a young girl living in an unnamed, shanty town on the coast of Morocco. We learn about her early life, her days spent following endless paths in the desert and the different relationships she maintains with The Hartani and Old Naman. After she is forced to flee her home town, Lalla finds herself in Marseille where she befriends Radicz the beggar.

“Each evening, their bleeding lips sought the cool wells, the brackish mud of alkaline rivers. Then, the cold night enveloped them, crushed their limbs and took their breath away, weighed down on their necks. There was no end to freedom, it was as vast as the wide world, beautiful and cruel as the light, gentle as the eyes of water.”

Interpretation: Desert is both a testament to the invisible bond between a tribal homeland and those who leave it and a hymn to the desert which appears as a symbol of the eternal nature, the one that bleeds your feet and makes your chest swell with awe.

Final thought: Le Clezio’s has a gift with words. His powerful writing is filled with poetry and although the story is slow-paced, you can appreciate the care with which each and every word has been selected in order to immerse us fully in a bygone age, a culture that has faded in the mists of time.

A masterpiece, best enjoyed slowly, like a refreshing cocktail in the summer heat.